Dr. Zach Suddath Henderson (1902-1985) was a star student and athlete in college and began his career in education as principal, coach and science teacher of Eastman High School.  In June 1927, he was tapped as Dean of Georgia Normal School, a position he held until February 1948, when he became President of the College, then Georgia Teachers College.  His presidency included the period in which the college was desegregated.  He retired in July 1968, having served Georgia Southern for 41 years. 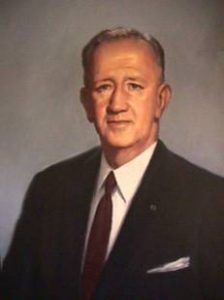